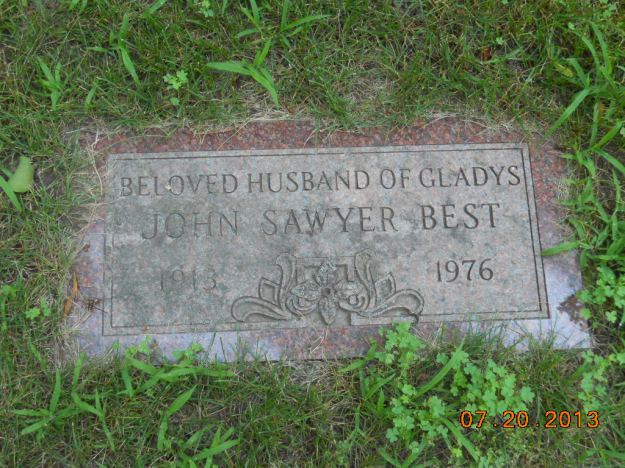 John Sawyer Best was the son of Alvin and Dora May(Hurd) Best. He was born in Birch Run Michigan on February 16, 1913. John and Dora Best had three children; Genevieve (1909), John (1913), Max (1918). In the 1920 Census, Alvin and Dora and their three children live in Birch Run, Michigan. Alvin works in a Grocery Store. John is six years old and attending school. By the 1930 Federal Census, Alvin has died and Dora has moved the family to Flint where she is working as an office clerk for a power company. John is now sixteen and attending high school.

John Sawyer married Gretchen A Appel on June 25, 1938, in Saginaw, Michigan. I am unable to find John and Gretchen in the 1940 Federal Census, two years after they were married. John was an Engineer for the Dow Chemical Company and they lived in Midland, Michigan at 421 Oak Street according to the 1958 Midland Directory.

John is my first cousin three times removed from my paternal Grandmother’s side of the family.  I am unable to obtain the names of the children because they are all living and privatized in the family trees available online (as they should be).