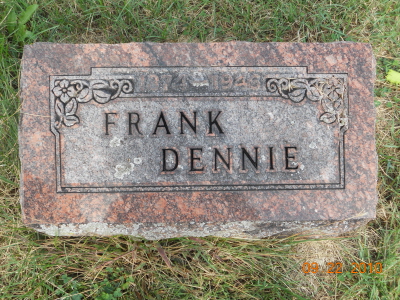 In the 1880 Federal Census, Francis is a five year old boy living with his parents in rural Wells County, Indiana. He has three siblings; Elva, Nellie, Arlena.

On August 22, 1895, Francis married Josephine Edyth Werst. In the 1900 Federal Census, Frank is listed with Josie and two children, Donald who is two years old and Fayma who is a newborn. They live on on Miner Street in Fort Wayne. Frank is a drill pressman in an iron works factory.

The 1910 Federal Census, Frank and Josie remain in Fort Wayne but now live on Huestis Street. Josie’s parents, Charles and Sarah Werst are living with them and they now have three children, Donald, Fayma and Waneta. Frank works for an electric company as a winder. They own their home.

In the 1920 Federal Census, Frank and his three children are living in Fort Wayne Indiana on Walnut Street. He is divorced and lists his occupation as machinist in a factory. He is renting his home. On April 5, 1922, Frank married Mabel Vera Fish in Hillsdale, Michigan. It is at this point that his last names is spelled Dennie instead of Denny or Denney. On the Marriage License he lists his residence as South Bend, Indiana and Mabel’s name is listed as Prokop though her maiden name is Fish on all of the records for their children.

By the 1930 Federal Census, Mabel and Frank have three children; Darrell (1922), Eugene (1923) and Betty J (1926). They live on Gulton Street in Fort Wayne and they own their home. Frank is working as a pipe fitter at Electric Works. In the 1940 Federal Census, Frank and Mabel have four children; Darrell, Eugene, Betty Jean, Trevis (1932). They live in Fort Wayne on Poplar Street. They own their home and Frank does not list an occupation. Since he is 65 years old I am thinking that he has retired.