Elizabeth Meyers (Myers) was the daughter of Henry and Margaret (Keller) Meyers (Myers)who was born on August 9, 1829 in Tuscarwas County, Ohio. Elizabeth lived her younger years in Dover, Ohio where she met and married Jesse Crites.  Elizabeth had at least one sister.

On January 1, 1850, Jesse Crites was granted land in Wells County, Union Township, Indiana. If he spent the first few years clearing and improving it, it would become his. He worked with his first cousin Daniel Fisher, who received a grant next to Jesse’s . They shared a wagon and each had a single horse which they put together to form a team.  These two men and their team worked together to clear their land.

This photo is believed to be Jesse and Elizabeth Crites

By the 1860 Federal Census, Jesse and Elizabeth have four children; Daniel (1850) , John H (1852) , Mary M ( 1856) and an unnamed 1 month old son. Jesse has cleared his land and is a farmer. In the 1870 Census, Jesse and Elizabeth have three children; John Henry who is eighteen years old, Mary who is fourteen years old and Jesse F who is five years old. By the 1880 Federal Census, the older children have married and left home but Jesse F. and Sarah Louise remain at home. Jesse is fifteen years old and Sarah is nine. After the 1880 Federal Census, I do not find records for Elizabeth and Jesse. I believe that they moved to Markle Indiana and lived with their daughter around 1900.  They remained in Zanesville, Indiana area.

This photo was identified by my Grandfather, Everett Smith in the early 1970’s to be that of Elizabeth Meyers Crites, his Great Grandmother Crites. I suspect that it is from around 1900. 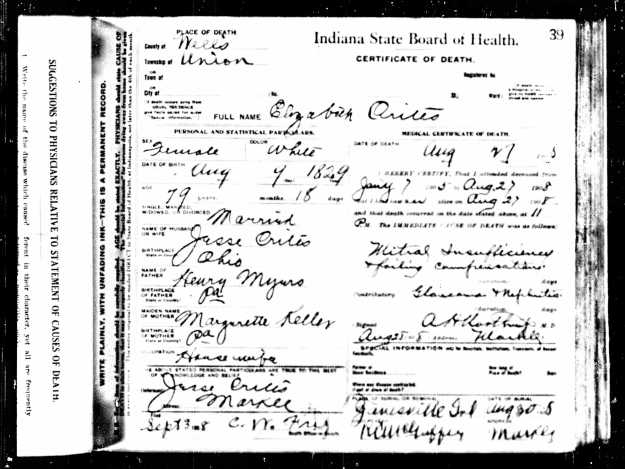 One hundred and eleven years ago, Elizabeth died on August 27, 1908 at the age of seventy-nine. She is buried in Hoverstock Cemetery in Zaineville, Indiana.