In the Wesleyan Methodist Baptismal records for London Ontario,  Andrew and Alexander Best were both baptized on January 28, 1866 by Reverend James Kennedy.  According to US Federal Census records,  Andrew stated that they left Canada in 1868.

Two years after arriving in the United States,  the 1870 Federal Census indicates that the Best Family lives in Kingston, Michigan. Thomas is a farmer. Living next door is a Lockwood and Mary (Dale) Pringle who are Rhue Anna’s parents. The Thomas Best Family is found in Koylton township, Tuscola County, Michigan in the 1880 Federal Census. Andrew is sixteen and Nora is eight years old.

Andrew Clinton married Lemyra Sheffer on December 23, 1885 in Cass City, Michigan. The next available Census is the 1900 Federal Census so by then Andrew and Lizzie (Lemyra) are living in Clifford, Michigan. They have a daughter whose name is Lena. She is 13 years old which means that she was born in 1887.

His occupation is listed as Weaver. He has been in the United States for 30 years but has not yet become a citizen. By the 1910 Federal Census, Andrew’s status is still listed as an Alien,  not a citizen. They live in North Branch and they have an additional daughter names Dena who is three years old. The older daughter is no longer living at home and they have lost a child since there are three live births listed but only two are living as of this Census. By the 1920 Federal Census, Andrew and his family remain in North Branch. Their daughter is listed in the Census as Nina P Best and she is thirteen years old. Andrew is a Naturalized Citizen of the United States. By the 1930 Federal Census, Andrew is listed as Clinton Best and he is 65 years old. He was a general farmer. His wife who is sixty years old is listed as Almira. This is the first time I have seen this name listed. Both of the daughters are no longer living at home. They remain in North Branch.

Eighty years ago today, Andrew Clinton died in North Branch, Michigan. His cause of death is listed as heart attack and a Cerebral Hemorrhage due to Hypertension. 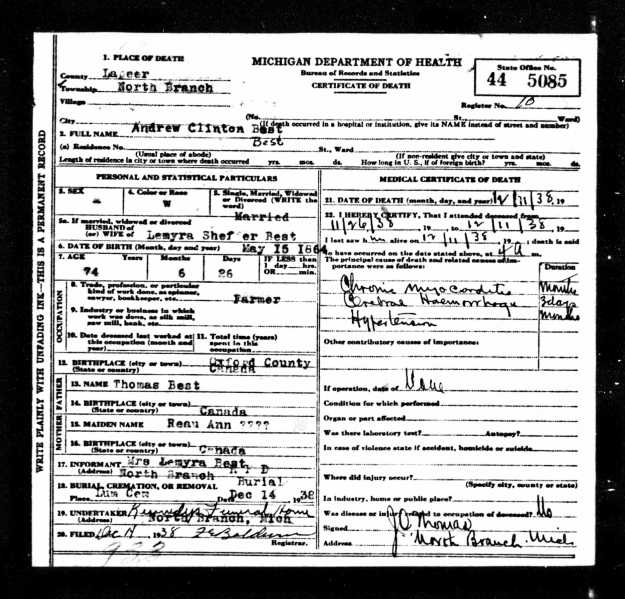 He is buried at the Arcadia Cemetery in Lum, Michigan along side his son, Earl who died in 1899.