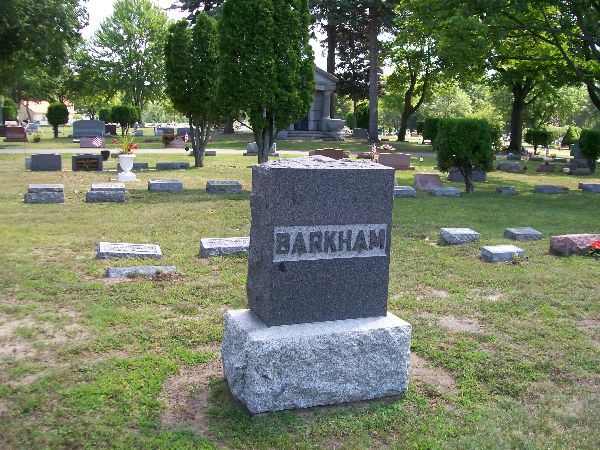 James married Mary Thomas. They were married in Michigan and most likely Oakland County but I have not found the marriage record yet. They had four children; Myrtie (1867), Harry (1869), James (1872), Carlton (1873). In the 1870 Federal Census, James and Mary are listed in Holly Michigan with two children, Myrtie and Harry. James is a Miller by trade. By the time of the 1880 Federal Census, James and Mary have four children; Myrtie, Harry, James and Carlton. Mary Thomas Barkham died on March 10, 1881 at the age of thirty four.

James married Myra in 1892. I do not know her maiden name at this time. In the 1900 Federal Census, James, Myra and Harry are found in Plano, Texas. He is a Miller working at a flour mill.  By the 1910 Federal Census, James and Myra have returned to Michigan and they live in Detroit.   James is employed at a flour mill. They live on Winder Street. They have one son, James and daughter Myrtie and her husband Joseph Bellford living with them. They seem to be running a boarding house and have eight lodgers living with them. In the 1930 Federal Census, James is living with his daughter, Myrtie and her family.  They are living in the Village of Holly.  Myra has apparently died.

Eighty five years ago today, at the age of ninety one, James died in Holly, Oakland County, Michigan. I have not been able to locate where James is buried. His death Certificate indicates that it is in Holly Michigan. He is likely buried with his first wife Mary but I am unable to locate her also. His Parents and siblings are buried in Commerce Village Burial Grounds. His children are buried in Lakeside Cemetery in Holly. When I find him, I will update this post.

James is the Uncle of the husband of my Great Grand Aunt.