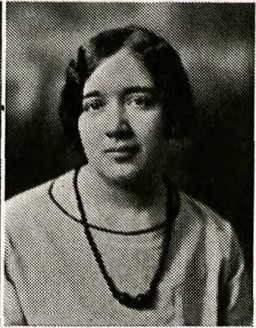 Genevieve completed two years of college obtaining her teaching degree. Her father, Alvin, died in 1928. She and her mother, Dora and her younger brothers are living in Flint by the time of the 1930 Federal Census.  Genevieve is working as a  school teacher in the public school system in Flint and her mother works as a clerk for the Post office.

Ione Genevieve married Earle John Stine on April 2, 1931. The marriage license indicates that Ione Genevieve lives in Clio Michigan and Earle lives in Midland. Earle is an armature winder.  In the 1935 State of Michigan Census, Earle and Iona live in rural Midland County.  The 1940 Federal census, Earle is working as an electrician for Dow Chemical Company and they now live in Richland township, Saginaw County.  They have three children; Earle Jr. (1932), Frances(1935), Peter (1939). They also have a teenage lodger/servant living with them whose name is Virginia Seifreid.  Virginia is from Kentucky and is fifteen years old.

Forty four years ago on October 15, 1975, Ione Genevieve died in University Park, Iowa. I am not certain when they moved there. It appears that at some point Earle become a minister.  It may be that they moved there for a ministry assignment. Ione died before Earle.  She was buried in Tanner Cemetery in Genesee County, Michigan.